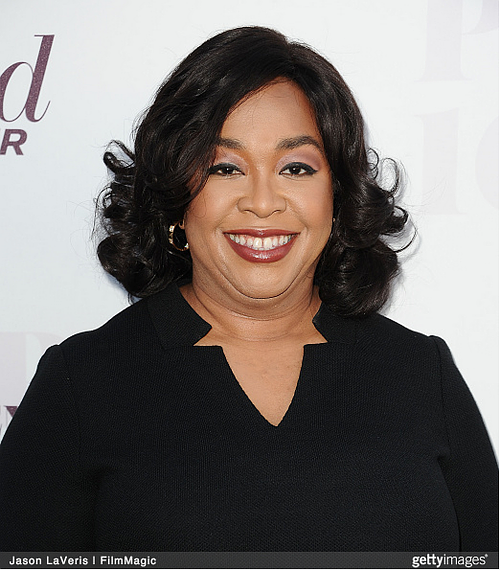 Shonda Rhimes recently accepted the Sherry Lansing Award at the 2014 Hollywood Reporter Women in Entertainment Breakfast at Milk Studios in Los Angeles, California. The award recognizes women who are pioneers and leaders in the industry.

While accepting the award, Rhimes delivered a rousing speech about breaking barriers in a field where there are so few women in leadership positions.

From then to now, we’ve all made such an incredible leap. Think of all of them. Fifty years ago trying to get out of separate rooms, 30 years ago trying to not serve breakfast or be groped by their bosses, 15 years ago trying to make clear that they could run a department as well as that guy over there. All the women, white, black, or brown who woke up like this, who came before me in this town. Think of them. Heads up, eyes on the target. Running. Full speed. Gravity be damned. Towards that thick layer of glass that is the ceiling. Running, full speed and crashing. Crashing into that ceiling and falling back. Crashing into it and falling back. Into it and falling back. Woman after woman. Each one running and each one crashing. And everyone falling. How many women had to hit that glass before the first crack appeared? How many cuts did they get, how many bruises? How hard did they have to hit the ceiling? How many women had to hit that glass to ripple it, to send out a thousand hairline fractures? How many women had to hit that glass before the pressure of their effort caused it to evolve from a thick pane of glass into just a thin sheet of splintered ice?

Watch the entire speech below.

Shonda Rhimes on Writing for Television After the Election: “My Pen Has Power.”