Shonda Rhimes on Her PGA Award Win: “I Deserve This.’ 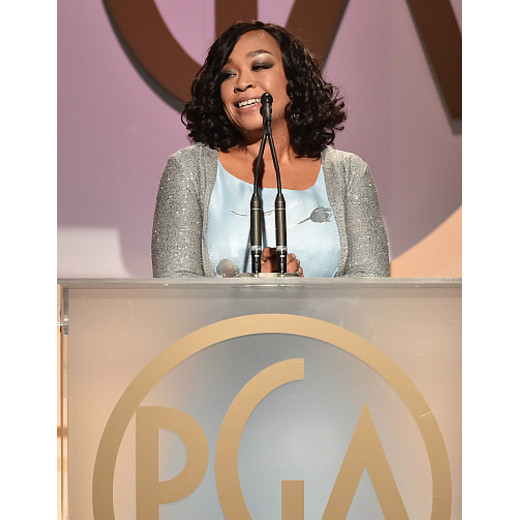 Creator and producer Shonda Rhimes has always taken on the topic of diversity in television as it relates to her work with an unmatched level of realness. Her approach, which is much-needed, is refreshing in an industry where race and gender are hot topics that are often danced around.

When accepting the Norman Lear Award for Achievement in Television over the weekend, Rhimes took the moment to celebrate the many milestones she’s reached when it comes to, what she once called “normalizing” television.

I created the content that I wanted to see and I created what I know is normal. So basically, you are just giving me an award for being me, in which case I totally deserve it. Really, I am honored to receive it. The respect of this award does mean the world. It just makes me a little bit sad. First of all, strong women and three-dimensional people of color is something Norman was doing 40-something years ago. So how come it has to be done all over again? What are we waiting for? I mean, I know this is a room full of producers, so probably you’re waiting for money.

“I have, against the odds, courageously pioneered the art of writing for people of color as if they were human beings. I’ve bravely gone around just casting parts for actors who were the best ones. I fearlessly faced down ABC when they completely agreed with me that Olivia Pope should be black. And I raised my sword heroically and then put it down again when Paul Lee never fought me about any of my storytelling choices.”

While we’re sure Rhimes was injecting a bit of humor into her speech, as the sole woman to “the solo female recipient of the award,” she definitely doesn’t have any reason to mince words or display false modesty.