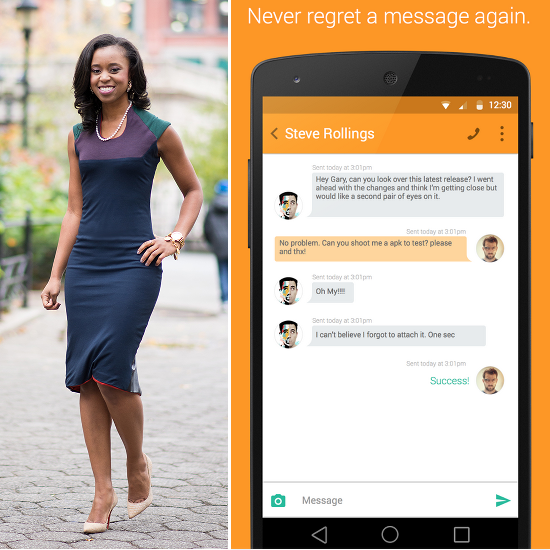 Twenty-eight year old programmer Maci Peterson recently released an app that will save this generation from a world of regret. Peterson’s unique app On Second Thought, allows users to take back messages that they may have sent in error. The app also contains a function that helps to curb cringe-worth drunk texts.

On Second Thought is very easy to use. After downloading the app from the Google Play Store, you go to the app’s settings, set On Second Thought as your default SMS app and determine the length of your “grace period”—up to 60 seconds. The “grace period” is the amount of time you have to swipe left and Ost (recall) a message after hitting “send.”

Another feature in development is “curfew.” It’s for those nights on the town when you know you might have a bit too much to drink. Just go to your On Second Thought settings, determine the time you’d like your “curfew” to start, and all messages you try to send after that time will be held until the next morning. Once the “curfew” expires, you can look back and see which messages you still want to send, and which ones you’re thankful didn’t go through.

The app, which has been dowloaded nearly 5,000 times so far, has been getting pretty high marks by reviewers. Download On Second Thought here. Follow Maci Peterson on Twitter.

Introducing tonr. A New App That Fights Washed Out Photo Filters for People of Color.’